What is in the Water in Waco? A Lot of Patents!

*Note:  this post contains information from an ongoing quantitative analysis study of the Western District of Texas, Waco Division. Watch this blog for further updates.

Waco is famous for a few things:  Baylor University (Congrats on the Championship!), the HGTV series Fixer Upper with Chip and Joanna Gaines, and the Branch Davidians.  But Waco is now known – at least in IP circles – as the epicenter of patent litigation.  The reasons are many, but center on Judge Alan D. Albright and the efficient system he has quickly established.

As soon as he rejoined the bench, Judge Albright rolled out the red carpet for patent litigants to file in Waco, welcoming patent suits.  However, he has also emphasized that his Court is not “plaintiff-friendly.”  He has stated that “I want every party that comes out of my Court to feel like I was scrupulously fair.” Instead, Judge Albright has put together rules and procedures that make patent cases more efficient than in other venues.

Judge Albright’s impact has been enormous.  In 2020, more patent cases were filed in the Western District of Texas than any other district, specifically just under one-fifth (19%) of all patent cases in the country. 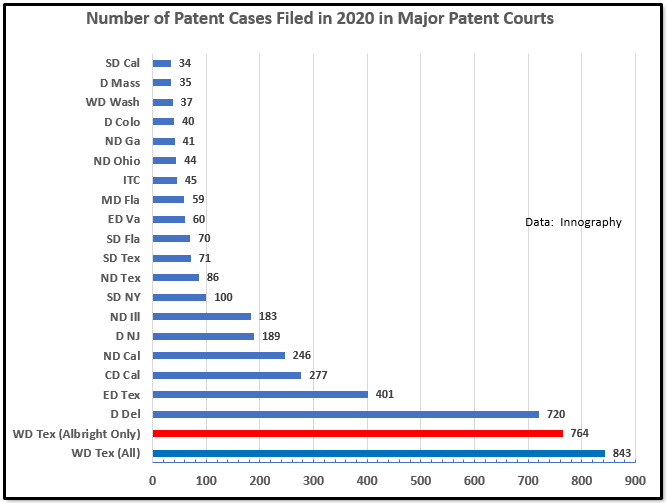 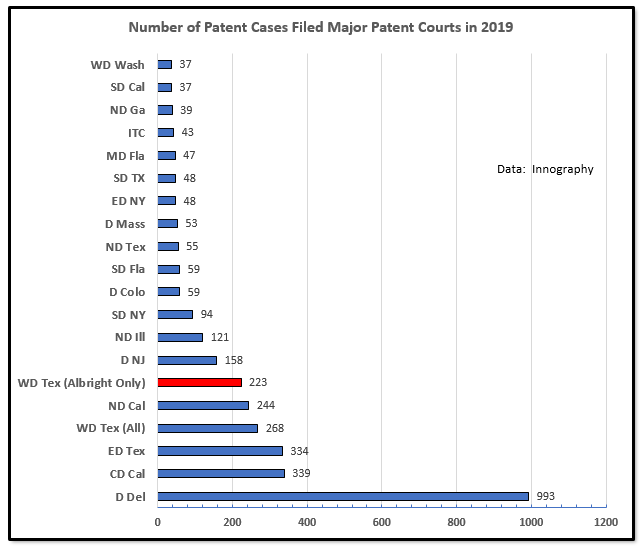 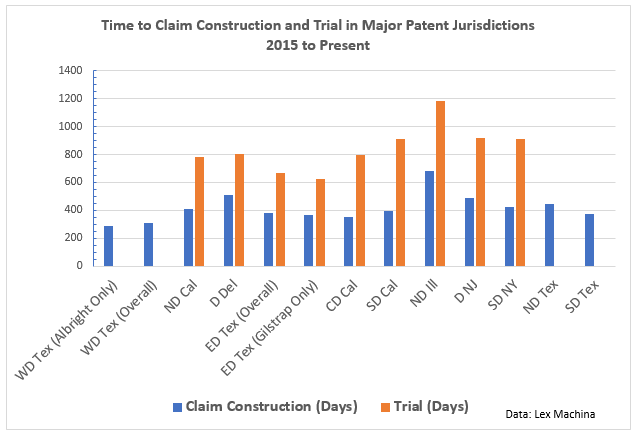 What precisely about the Waco Division entices so many patent owners to file in Waco?  A better question might be to consider the main alternatives, such as California and Delaware.

Unlike some judges who dislike patent cases for a variety of reasons, as mentioned above, Judge Albright has embraced them. Whereas some judges would eagerly transfer a patent case to another court when a motion to transfer is filed, creating uncertainty as to where a case may ultimately end up, Judge Albright has demonstrated a reluctance to transfer cases for convenience. He has transferred only a handful of cases, usually when there are previously filed related cases elsewhere.  This means that so long as a case has a demonstrable tie to the Western District of Texas, it will likely stay there.

TIME TO CLAIM CONSTRUCTION AND TRIAL

A critical consideration for patent litigation is time to trial.  Judge Albright has had only two patent trials so far.  While these two data points are not sufficient to generate a meaningful statistic, it is worth noting that Judge Albright has generally been setting trial dates from 22-24 months from filing (670-730 days) over the last few months. The chart below shows comparatively the average length of time to claim construction and time to trial in the top ten patent litigation venues.

As can be seen, although Waco has a docket that is generally quicker than most, it is hardly a “rocket docket.” A faster time such milestones benefits both patent owners who seek to litigate efficiently and accused infringers who seek key decisions (e.g., claim construction and summary judgment) to better under their risk exposure.

One important consideration in evaluating a patent litigation venue is the likelihood of a district court staying the patent litigation case following a petition inter partes review (“IPR”) or institution of IPR.  IPRs are challenges to a patent’s validity filed in a division of the U.S. Patent Office known as the Patent Trial and Appeals Board (“PTAB”).  In the past year, from filing of a petition to final decision, an IPR in the electrical and computer patent field has taken almost 18 months.  https://www.uspto.gov/sites/default/files/documents/appeal_and_interference_statistics_february2021.pdf (PTAB statistics).  Almost every patent case in district court results in the accused infringer filing at least one IPR. Some district courts prefer to stay cases when an IPR has been filed, taking a “wait-and-see” approach and deferring need for the court to make difficult decisions in the complex patent cases. Moreover, given the Federal Circuit’s rates of reversal, a district court faces a fairly high likelihood of their decisions reversed for various reasons. Courts that take a “wait-and-see” approach effectively draw out an already long litigation for at least an 12-18 months. Judge Albright, however, generally has not stayed cases pending IPRs at the PTAB.

He has explained, “I think that people have a constitutional right to assert their patent. I mean, patents are in the Constitution, the right to a jury trial is in the Constitution. I am not taking away anyone's right to go to the PTAB, but I think people ought to have a jury trial.”  Judge Albright has proven to move patent cases towards trials quickly.  This is important because  a factor used by the PTAB to decide whether it will institute an IPR [a factor to decide whether it will institute an IPR] is whether the District Court will get to trial first. A case before Judge Albright has a greater chance than most patent cases in getting to trial before the PTAB can.

Judge Albright’s dedication to the trial process has been born out through his decisions on patent eligibility under 35 U.S.C. § 101, which are sometimes referred to as “Alice motions” named for Alice Corp. v. CLS Bank International, 573 U.S. 208 (2014). Since 2014, Alice motions have become a normal part of litigation practice. Over time, Alice motions have been brought earlier and earlier in cases. Some Alice motions have been decided on the basis of the complaint alone, without the benefit of claim construction. See, e.g., Two Way Media Ltd. v. Comcast Cable Comms., et al., Case Nos. 1:14-cv-01006, 1:14-cv-01212 (D. Del. 2017). In contrast, Judge Albright rarely hears a § 101 motion “until after a Markman in the form of a motion for summary judgment.”

The Western District of Texas does not have Patent Rules like the Eastern District of Texas, but Judge Albright has adopted an “Order Governing Proceedings” (“OGP”) for patent cases, which unlike many district court’s patent rules, is regularly updated at the Court’s website.  The OGP includes a template schedule, requirements for preliminary infringement and validity contentions, standard discovery limits, rules regarding electronically stored information, discovery disputes, protective orders, and claim construction. Judge Albright also provides exemplary technology tutorials that the Judge believes have been helpful in the past.  Finally, he has published various FAQs on the Court’s website.  The Court’s current schedule can be found there too.

Another advantage to Judge Albright’s Court is common sense discovery rules.  While other judges often excoriate attorneys from both sides for bringing a discovery dispute, Albright instead acknowledges that there will be disputes and that “this is what I am here for.”  Before filing a motion to compel, the parties must meet and confer and contact his clerks via the convenient all-clerks email. If the issue cannot be resolved via email, he will conduct a brief telephonic hearing and immediately issue an order, thereby avoiding costly and protracted briefing and hearings. This mechanism for resolution may also deter some discovery disputes. Notably, many of Judge Albright’s clerks have technical backgrounds, which allows him to run the largest patent docket in the country efficiently.

One potential drawback of litigating in the Western District of Texas is that substantive discovery is not usually allowed until after claim construction. On one hand, this local practice saves parties on both sides time and money because it forces them to wait until after they know what the claims of a patent mean to engage in costly discovery.  On the other hand, this can make it more difficult for parties to prepare early infringement contentions, invalidity contentions, and assessments of damages. It can also mean that a case wherein the damages at issue do not justify the cost of litigation is continued past when it otherwise would have been, if sufficient damages information had been produced earlier in the case. This local practice also may prolong a case of uncertain infringement. For example, some source code-based cases require highly confidential information that is only in the defendant's possession to accurately assess infringement.

Like other districts, the Western District of Texas is not a perfect venue for either plaintiffs or defendants.  However, the combination of common-sense rules and Judge Albright’s belief in jury trials make it a fair and efficient place to adjudicate patent disputes.