What’s Really Going on with Fintiv at the Patent Trial and Appeal Board?

The now ten year-old law that created the Inter Partes Review (“IPR”) system gave the U.S. Patent and Trademark Office (“PTO”) the discretion to deny institution of an IPR when there was not a “reasonable likelihood that the petitioner would prevail with respect to at least 1 of the claims challenged in the Petition.”[i] The Patent Trial and Appeal Board (the “Board”) has since relied on this discretion to deny institution of IPR’s based on the status and timing of infringement litigation involving the same claims as in the IPR to prevent the inefficient use of Board resources.[ii] The Board further expanded on this reasoning in 2020, setting forth six factors (the “Fintiv factors”) to be considered in deciding on the institution of an IPR in light of overlapping infringement litigation.[iii]

The application of the Fintiv factors is facing challenges in several courts, mainly by large tech companies arguing that denying institution using this reasoning exceeds the PTO’s statutory authority, is arbitrary and capricious, or was adopted without legally required procedures. Senator Patrick Leahy (one of the authors of the law that created IPR’s) has announced a new bill seeking to reign in the PTO’s supposed expansion of the statutory reasons to deny institution of an IPR. With all of the effort pushing back against current PTO practice, it would be interesting to know how often, and under what circumstances, the Board denies institution of IPR’s based on the Fintiv factors.

Frequency of Non-institution Decisions Based on the Fintiv factors 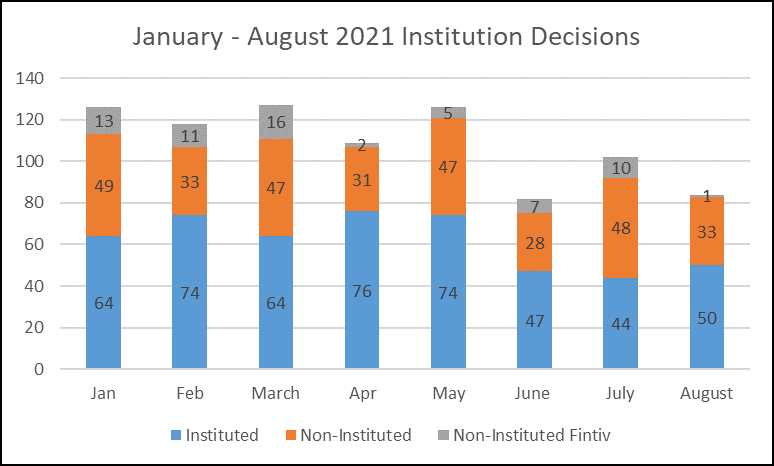 The data shows a drop off in the number of petitions for IPR being denied institution after the first quarter of 2021. The explanation of this drop-off is likely a combination of factors, including:

Board Approach to the Fintiv Factors

The six Fintiv factors, which should be considered holistically, are:

Factor 1 considers whether or not a stay has been issued in the related litigation. The presence of a stay would favor institution of an IPR. Although some Boards found this factor to favor denial of institution, most Boards found that factor 1 was neutral because no stay was granted at the time of the institution decision. As discussed above, the majority of these petitions were related to litigation in jurisdictions that value moving toward trial.

Factor 3 – Investment Made by Parties and Court in Litigation

Factor 4 – Overlap of Issues between IPR and litigation

Factor 4 considers any potential overlap of issues that will be considered by the district court and the Board, if the IPR is instituted. In December 2020, the PTO designated as precedential a Board decision that held a stipulation filed with the district court by the petitioner agreeing that, if the IPR is instituted, petitioner would not pursue in the litigation any ground that was raised or could have been raised in an IPR.[v] Filing a similar stipulation seemed to be critical in the Board finding this factor favored institution of the IPR. Given the potential impact of such a stipulation, patent owners should identify other issues that overlap between the IPR and the district court litigation (such as priority date or claim construction) that may impact validity but could be decided differently by the Board and the district court.

Despite statistics showing a decline in Fintiv-based non-institution decisions, Fintiv can still be a powerful tool for patent owners under the right facts.  On the flip side, petitioners must have Fintiv in mind when they first become aware of the infringement suit.  Gone are the days of waiting with relative impunity until the end of the 1 year statutory IPR filing window.  Petitioners should file their petitions as soon as they can gather and evaluate the prior art, particularly in federal districts where time from complaint to trial is shorter than normal.